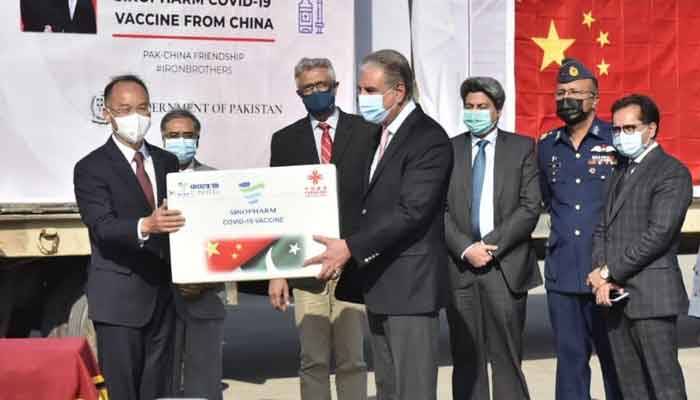 A ceremony was held at Nur Khan Base in Islamabad where 0.5 million doses were given to Foreign Minister Shah Mehmood Qureshi.

While talking to media, the foreign minister said the “gift is a practical proof of friendship between the two countries,” adding that “China once again demonstrated its everlasting friendship with Pakistan,” by helping it in times of need.

“This is even more important as we are completing seven decades of diplomatic ties this year,” he added.

FM Qureshi said: “I want to thank the Chinese government, President Xi Jinping, and the people of China on behalf of the Pakistani government and Prime Minister Imran Khan.”

The minister also expressed his gratitude to his Chinese counterpart, Wang Yi, with whom he was in talks for the early delivery of the vaccine.

Qureshi added that Beijing has stood “shoulder-to-shoulder with Islamabad in the fight against the coronavirus.”

Chinese Ambassador Nong Rong said Pakistan was the “first country in the world to receive vaccines donated by the Chinese government”, calling it a “manifestation of brotherhood”.

Rong said that Pakistan is China’s “closest friend” and is a “priority for cooperation.” The envoy also mentioned Pakistan’s approval of Sinopharm vaccine and trials of another Chinese vaccine.

“Thank God, the first batch of Sinopharm vaccine has arrived! Grateful to China and everyone who made this happen,” Sultan said in a statement released on Twitter.

“I salute our frontline healthcare workers for their efforts and they’ll be first to get vaccinated,” he said.

Pakistan has asked China for another one million doses. Pakistan is also set to receive 17 million doses of AstraZeneca’s COVID-19 vaccine under a global scheme to deliver coronavirus treatments to developing nations.

About 6 million doses will arrive by the end of March under the COVAX scheme, with the remainder due by mid-year, Sultan announced last week.

“All eligible citizens as per phases will be informed to register once the vaccine process will start,” health ministry announced on its website.

Pakistan signed up last year to the vaccine sharing scheme coordinated by the World Health Organisation to support lower-income countries.

Pakistan has approved both the vaccines for emergency use and will review their approval quarterly, officials said.