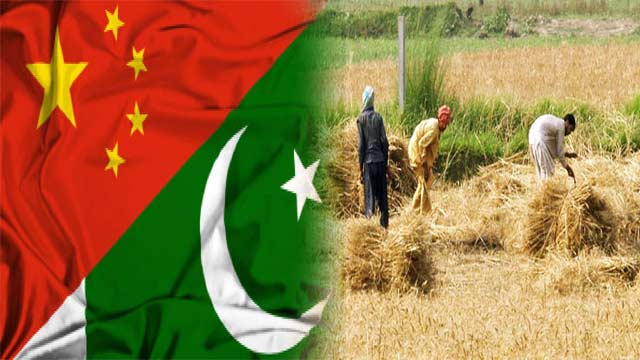 Pakistan can modernise its agriculture sector with China’s help to boost the national economy, WealthPK reported.

The cooperation between China and Pakistan can prove significant for the development of the agriculture sector in the latter. Pakistan has enormous potential to access the huge agricultural market in China through the China-Pakistan Economic Corridor (CPEC). Dr Liaqat Ali Shah, Executive Director and Head of the Policy Division at CPEC Authority, told WealthPK that the mega project would boost the agriculture sector in Pakistan. He said that CPEC offered a great opportunity to cement bilateral cooperation and mitigate the trade imbalance between the two countries.

“The agriculture sector is playing a crucial role in the country’s economy through a variety of channels. However, in the current scenario, agriculture in Pakistan is facing several challenges including shortage of water, sudden climate fluctuations, shortage of pesticides, unavailability of proper seeds, poor infrastructure and lack of innovative research. These issues can be mitigated through modern technology and strong policies,” he said. Dr Laiqat Ali said that agriculture is the backbone of the national economy. He said that the involvement and cooperation of China could mark a new era in the modernisation of Pakistan’s agriculture sector.

He said that the economy of Pakistan depends heavily on agriculture. He said that Pakistan’s economy could not become stable without the development of the agriculture sector. “Agricultural production is a top priority for the Pakistani government and proactive measures have been taken to reduce costs and improve efficiency in the industry. Rapid population growth creates a greater need to modernise agriculture across the country,” he said. Dr Liaqat Ali said that there was considerable potential for cooperation between China and Pakistan in various fields such as agriculture, rural development and capacity building for farmers. He said that cooperation by China in the field of agriculture would enable Pakistan to overcome the challenges and boost the export of agricultural products to China and other countries. He said that agriculture is a core export industry, contributing significantly to Pakistan’s foreign exchange besides assisting other economic sectors to expand. “It is a manifestation of the fact that the agriculture sector is vital for the country’s overall economy,” he added. He said that due to its ability to quickly end poverty and produce economic benefits, agriculture has a competitive advantage over other sectors of the economy.

“Pakistan needs to adopt modern agricultural methods to boost this sector. Agriculture productivity can be increased by the use of modern technology and improvement in existing technology. We can integrate the growth of food crops and that of cash crops by adapting to local conditions, building on strengths and avoiding weaknesses,” Dr Liaqat Ali told WealthPK.